We now offer ChArUco Targets on Dibond with an Anti-Reflective surface "flood white" print option for a true matte finish, making them more easily detected in your computer vision pipeline.

Direct to substrate printing at 1000 dpi with anti-reflective surface "flood white" authentic matte finish allows for easy detection in your computer vision pipeline because of its optical performance and physical robustness. 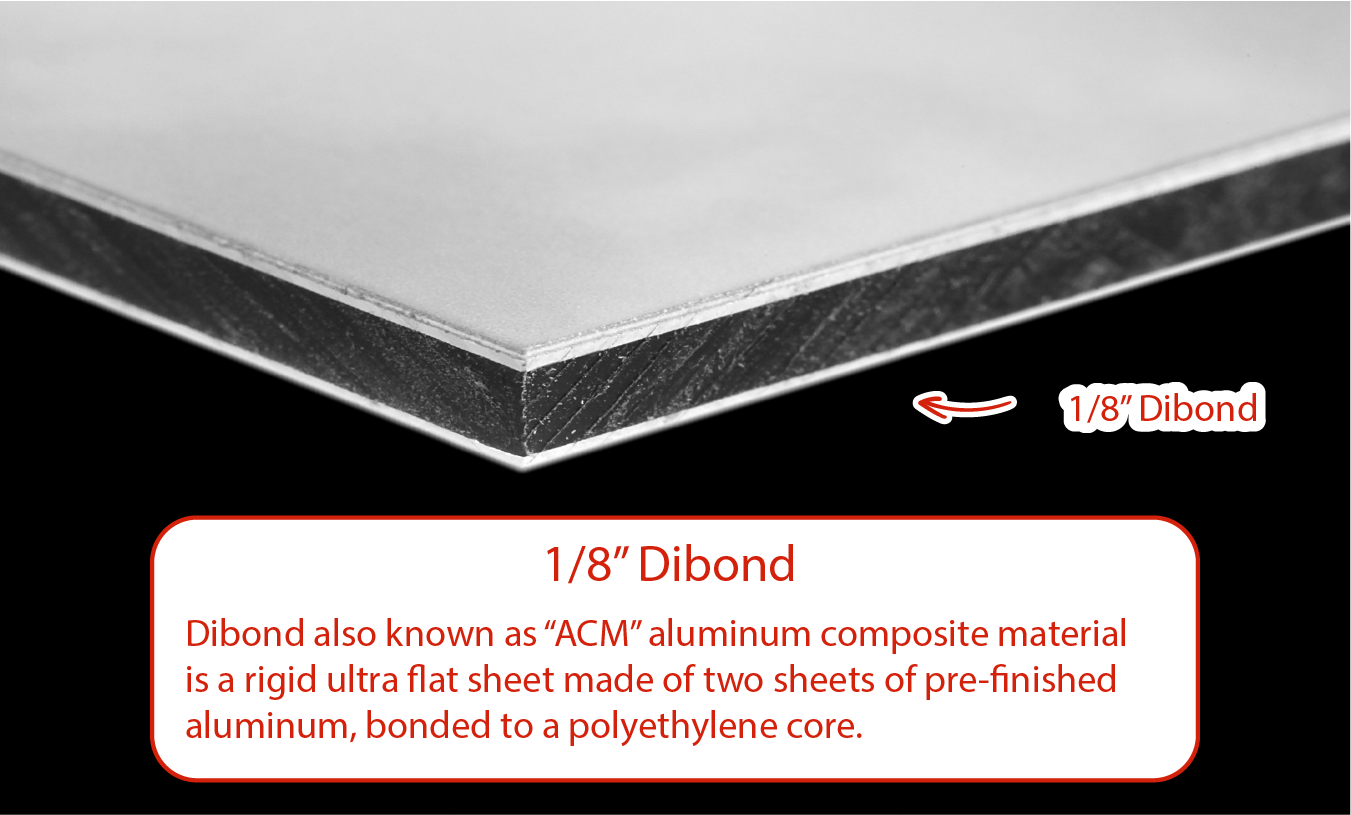 Dibond signage has forever been an industry standard for indoor and outdoor business signs. The material is water, weather, warp resistant and rust proof. It's ultra flat and rigid structure makes Dibond the perfect material for calibration targets.

What Are Charuco Targets?

A charuco target is a traditional chessboard pattern that incorporates makers in the empty white sections.

Charuco targets aim to circumvent some of the shortcomings you may encounter with classical checkerboards. One thing to note is that the detection algorithm of charuco targets is pretty complicated.

Fortunately, the introduction of OpenCV 3.0,0 and its later versions empresses the charuco target detection. It is, therefore, straightforward to use and achieve the benefits charuco targets offer.

How Do Charuco Targets Look?

Charuco targets have specially encoded sections. For this reason, you can calibrate with a partially blocked or unsuitable target position. You can use software like like photo modeler and halcon to help.

Charuco targets enhance the protection against picture noise. Their properties permit capturing of data from the extreme peripheries of photos. Being able to get that much data ensures precision and robustness in identifying your lens’s parameters.

Moreover, the specific coding of attribute points enables you to perform stereo calibration where some edges may get partially obscured. 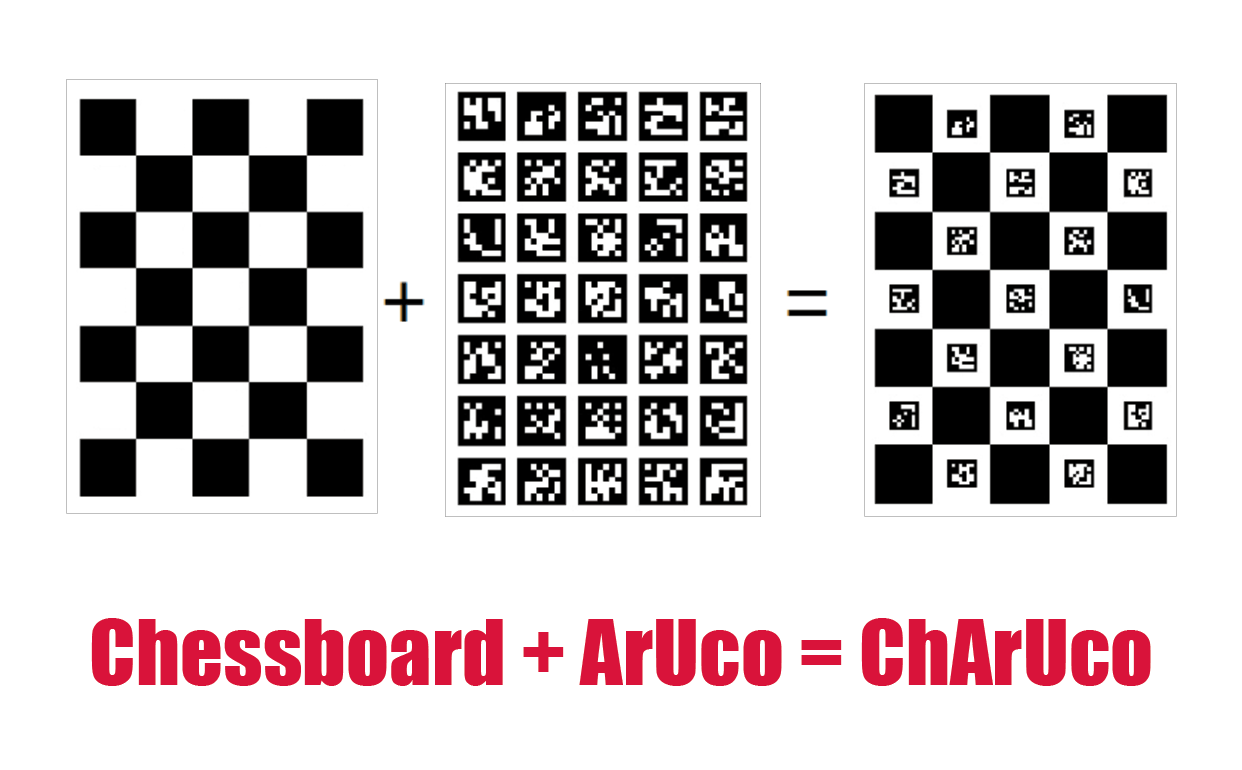 A Combination of Chessboard Targets and Aruco Targets

Charuco targets are a merge between checkerboard patterns and aruco targets. And are one of many custom targets we provide.

Aruco boards and makers are essential because of their flexibility and ease of detection. However, one of the challenges users face with aruco targets is that the precision of the edges is not as high as desired.

Even if you try subpixel refinement of these corners, the outcome is still not as accurate as required.

Chessboard patterns are easier to fine-tune the corners, given each corner has two black squares. Unfortunately, the versatility of a chessboard target is not as extensive as that of an aruco target. When using the chessboard pattern, no omissions are acceptable, and your board should be entirely visible.

Charuco targets, therefore, combine both patterns to achieve the benefits of both of them.

The aruco areas aid in the interpolation of chessboard corner positions. This way, you can achieve the flexibility of aruco makers as they permit you to use them with some sections blocked from view.

What’s more, given the interpolated corners belong to chessboard patterns, they have high precision when it comes to subpixel accuracy.

So, when calibrating your camera or conducting other applications demanding a high degree of exactness, charuco boards offer a better option than both aruco and chessboard targets.

What are the Benefits of Charuco Targets?

The most significant advantage of charuco targets lies in the unique coding and identifiability of checker areas. Therefore, even partially obscured and unsuitable camera photos are usable in calibration.

For example, immense ring lights can result in the non-uniform exposure of your calibration target. That is, some sections experience semi-specular reflection, something that would fail checkerboard patterns.

When using a charuco target, however, the remaining visible saddle points are still adequate for calibration. With charuco targets, you can fine-tune the identification of saddle points with subpixel accuracy, as is the case with checkerboard patterns.

Data at the extreme peripheries of images is a very useful feature. Since you can position charuco targets to be partially visible to your camera, you can record observations from your camera images’ extreme corners and edges.

Access to this information often results in excellent and robust identification of your lens’s distortion parameters. So, when you have access to OpenCV 3.x, charuco targets are the best to use.

Charuco targets are typically applicable when calibrating several cameras, i.e. stereo calibration. During this process, you need to implement a code. This code should help you identify the points that each camera detected and the points of intersection detected by all cameras under calibration.

Creating the Charuco Board

Here is a breakdown:

Though each maker’s ids (unique identifiers) get assigned by default; you can change them from board.ids. After obtaining your charuco board object, the next step is printing it.

Detecting a Charuco Board

Where calibration parameters are available, charuco corners get interpolated in two steps.

Without calibration parameters, the process involves calculating the tallying homography between your charuco image projection and the charuco plane.

The main issue with homography usage is the susceptibility of interpolation to image distortion. Homography only gets performed with closely positioned charuco corner makers to minimize distortion effects.

You should disable maker corner refinement during charuco board detection, especially when applying homography. This way, you prevent the subpixel process from providing corner position deviations given the closeness of checkerboard squares. The variations affect the interpolation of charuco corners resulting in poor outcomes.

After charuco corner interpolation, the next step is drawing the corners to verify detection accuracy. You can do so using the drawDetectedCornersCharuco() function.

While pose estimating, position the charuco board coordinate system with its Z-axis pointing outwards and at the board’s bottom left corner.

The function to use is estimatePoseCharucoBoard(). You get true with correct pose estimation, and false if wrong. Leading reasons for a false outcome include:

What Size of Charuco Target Should I Use?

Once you pick a charuco target for calibration, identifying a suitable size is essential. The size of your charuco board relates to the dimensions of the FOV (field of view) of your last application. Considering this is vital as you need to focus your cameras on that particular distance as you calibrate.

Adjusting your focus distance though slightly, still impacts your focal length. As a result, the previous calibrations you performed will be valueless.

Even adjusting your lens aperture detrimentally affects the accuracy of your calibration, and you should therefore refrain from altering the f/stop.

To ensure calibration accuracy, ensure your charuco target occupies most of your camera image. If you decide to use a small charuco plate, multiple variations of camera parameters can account for the taken observations.

In short, the charuco board needs to occupy a minimum of half your camera’s pixel area in a frontal observation.

Just want to say thank you very much to Dave Christian for his patience who walked me through every step of the order from speccing boards to filing a claim for a damaged delivery.

Product was added to shopping cart