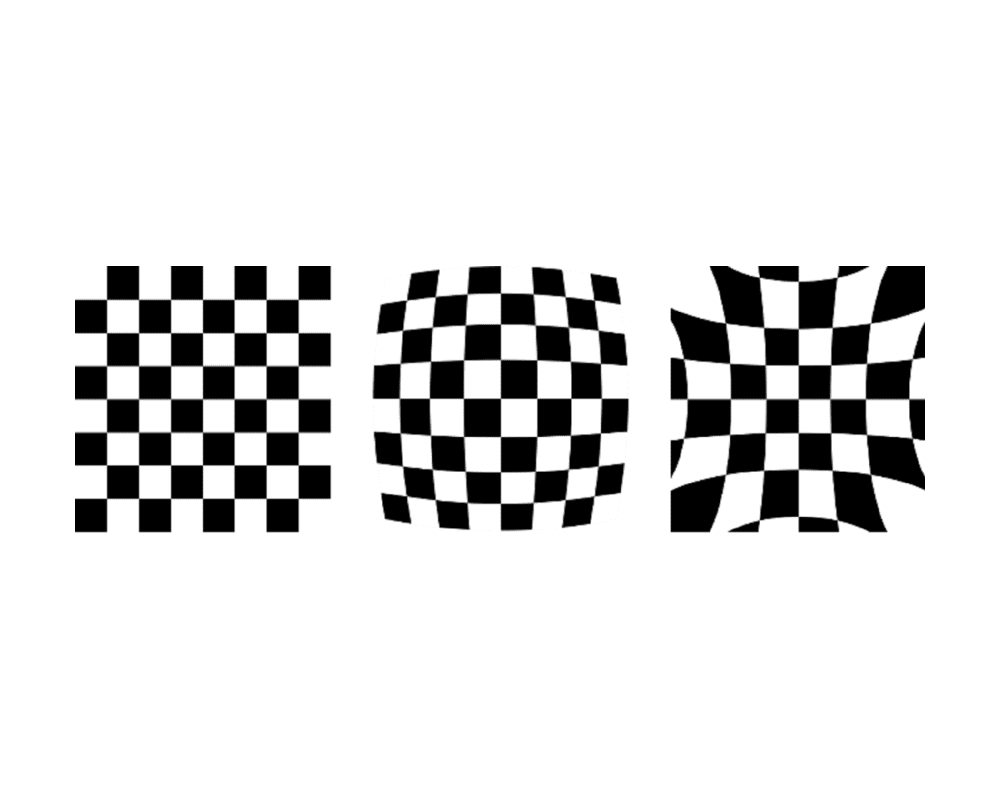 Brown's Distortion Model & How To Use It

The Brown distortion model/ Brown's Conrady model is basically a way to compensate for displacement of pixels in computer vision uses. Lens distortion is the appearance of a deformation that occurs on photos. In simple words, it is the phenomenon where curved lines come in place of straight lines on camera images. While sometimes distortion is an artistic expression and intended, it may also occur by error.

Lens distortion majorly occurs in two ways which include radial and tangential distortions.

The model is also applicable in correcting tangential or decentering distortion resulting from the imperfect alignment of the physical elements on a lens.

(xc, yc) is the distortion center

Pn is the coefficient for the nth tangential distortion

While pincushion distortion typically has a positive K1, barrel distortion has a negative value. The radial geometric series of mustache distortion features is non-monotonic in which for a particular value of r, the sign changes.

The Brown- Conrady model is less common when dealing with radial distortion due to its complexity. The above model is much preferred due to its simplicity when describing highly accurate severe distortion. A single term is adequate in modeling most cameras with the above model.

Warping an image in reverse distortion allows the software to correct the issues. The same involves identifying the displaced pixels corresponding with each undisplaced pixel on the distorted image. This is significant because of the distortion equation's non-linearity.

You can immensely reduce purple/ blue fringing (lateral chromatic aberration) with such warping applied separately to blue, green, and red.

Distorting and undistorting require either inversion of the linear problem or both assortments of coefficients. Linear Problem inversion typically has no analytical solution.

Standard solutions like iterative solvers, approximation, and locally linearizing are applicable. Your computational resources and the accuracy you want to determine which solvers are most suitable.

From the above model, we get to solve some types of camera distortion. So how do these distortions happen?

Radial distortion is one of the main categories of camera distortion. It occurs depending on your lens's design and profile. Occasionally, the distortion happens due to particular lens elements meant to prevent other visual problems like spherical aberrations.

We can further categorize radial distortion into three types:

These distortion effects consist of radial symmetry. They appear at the center of the focal length range and are severe at the ends of the wide-angle range in zoom lenses. At a certain distance from the principle, the degree of distortion is constant.

A single variable function r is adequate to describe the distortion effects given their radial symmetry. Taking your image coordinates to be v and u and cx, cy as the coordinate for the principle point, we can get r using the formula in which r (u, v) signifies the distance from the center of the image.

Various ideal radial lens distortion parametric functions are present today. Brown's even-ordered model is one of the most widely accepted.

The Brown model uses three parameters K5, K2, K1. Being polynomially coefficient, they allow the presence of a smooth varying distortion. The distortion can be negative as in barrel, positive as in pincushion distortion, or both negative and positive, making that mustache distortion.

You only need to include even polynomial orders since the domain for the function is always positive (r∈ [0; rmax]).

Mathematically, pincushion and barrel distortion are quadratic. For this reason, they increase similarly to the square of their distance from the middle.

This distortion describes effects you cannot easily explain using a radial distortion model and its other name is prism distortion. This distortion can occur because of decentering, which is the improper alignment of various lens elements.

Another cause is the poor positioning of the optical axis on the sensor plane. Brown also proposed a model adequately able to fit the pixel distortion, as shown below:

Combining the prism model with the radial distortion model brings about the Brown-Conrady model or Plumb Bob model.

It is often unnecessary to encompass prism distortion parameters within your camera model if you want good quality cameras and lenses.

Like radial distortion parameters and central point coordinates, a sizable number of properly distributed calibration photos are essential in the precise determination of these parameters and with good repeatability. Therefore, if your lenses and cameras are of adequate quality, it is better not to include them.

While the Conrady model can help in camera calibration, it is vital to determine which type of camera distortion you are experiencing to pick the most suitable solution.

Product was added to shopping cart