What Are Giant Checks?

You’ve seen them on television. You’ve seen them in pictures. Perhaps, you’ve seen one in real life: giant checks that are presented at specific events. They’re novelty items that seem to have no use, especially if you’ve never received one, but they do have their time and place - usually celebrating something momentous. Celebrate with us by checking out the best deals for giant checks here. Gatorboards make the best backing for giant checks. In fact, we recommend ordering at the below links (based on whatever size you want) for the perfect giant check:

These sizes are great but if you want high-quality options and issue a lot of giant checks check out dry erase foam boards. They're reusable so you don't have to keep purchasing them. Pop a message in the chatbox to get the best price for dry erase gator boards. The giant check came about sometime during World War II and has been used a lot since but only for specific types of events. These are the top 5 ways that the giant check is used.

Obviously, when you donate during the holidays, you don’t hand the guy ringing the bell outside of the mall a giant check. You throw in your change and walk away. But, there are quite a few instances where a representative of the organization receiving the donation is handed over a huge check, both in monetary value and actual size. Big checks are used in making donations usually during big events or if the person making the donation has some sort of social significance. For example, if a gala is organized to raise money for an organization, then at the end of the night, when the money raised has been calculated, you will see a giant check presented to celebrate the amount they’ve achieved. Another instance could be the mayor of the city publicly presenting a check to an organization or a public institute to show how invested they are in helping improve the community.

This use of a giant check is pretty straightforward. You’re sitting on the couch, lottery ticket in hand. So far they’ve called all of your numbers, and it’s down to the last one. You’re sitting on the edge of your seat when they finally announce that you’ve won! In a drawing that has thousands of other people participating in the process, you are the one who has just won. To celebrate, you’ll often have your picture taken with a giant check to show how much money you have been awarded. 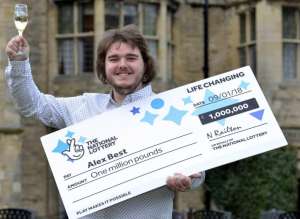 3. Winning on a Television Show.

Perhaps the most common use for a giant check is the use of one on a television show or commercial. Many sitcoms will have that one episode where the main character has won! Won what? Sometimes the audience knows, sometimes they don’t. If they win in the presence of the company, then a giant check is presented. The most common instance of this is when a character walks into an establishment and is the 1 millionth customer. 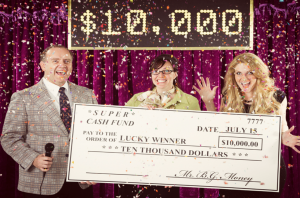 4. Being the 1 Millionth Customer.

While it happens more often on TV, it is possible to win a prize for being the person that is the 1 millionth customer to visit a restaurant, store, etc. Perhaps confetti will fall from the roof or the entire staff will come out clapping. In situations where this happens, you might be presented with a huge check. It’s also entirely possible that they’ll just give you a gift certificate or free meal, but the possibility of the giant check is still there. 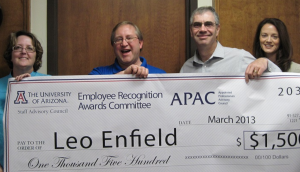 Can You Deposit the Giant Check?

The question that is on everyone’s mind when they do see a huge check is usually “how do you deposit it?” followed by “can you deposit it?” When depositing a check, the check has to contain specific information such as the payer’s name and account name, the name of the bank the payer uses, the bank’s state, the date, the words “pay to the order of,” the name of the payee, the dollar amount in written and numerical form, and the signature of the account owner. Those are the only things needed for the check to be considered valid.   There are no specifications for the dimensions or material of the check. There’s not even a special kind of paper that checks need to be printed on. However, the most common products used are Foamcore board and Gatorboard. You can have a check printed on a simple 100 lb poster paper, and it’ll be accepted. You may not even need paper. These are not suggested ways to deposit a check, but there are stories of people writing checks on shirts, flesh, doors, and napkins and having them accepted. Do keep in mind, while a huge check can technically be valid, there are banks that have rules that you must abide by if you have an account. They can reject a check or any other type of document if it doesn’t meet their standards. If your bank doesn’t have any rules like this, then you should be able to deposit your huge check. Just be sure to put it into your savings account.